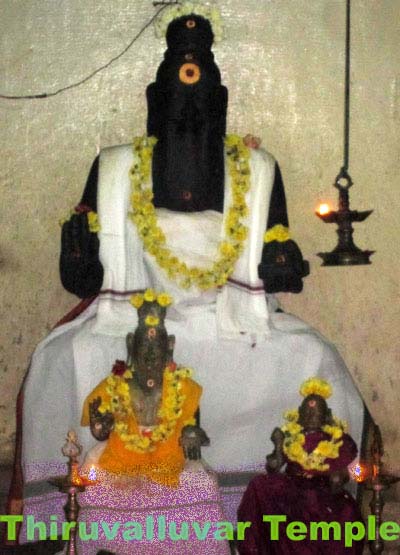 
Originally Thiruvalluvar was a memorial built in the memory of Thiruvalluvar (Tamil Poet). But people believed him as God and started performing pooja’s and converted the Memorial into a temple. Hence it is known as Thiruvalluvar Temple, located in Thiruvalluvar Koil Street, Mylapore.

Ekambareswarar and Kamatchi are the main deities along with Vinayahar, Murugar, Navagrahas and Saneeswarar shrines. The Ekambareswarar shrine is considered as the birth place of Thiruvalluvar by some researchers and as the Samadhi by others.


In the temple complex there are other shrines of Ganesha, Muruga, Shiva and Ambal. The main shrines of the temple are Thiruvalluvar and his consort Vasugi. For Children, classes on Thiruvalluvar are conducted in the evenings. This temple is completely dedicated to his contribution to Tamil literature.