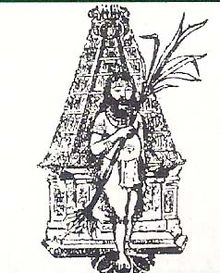 Pattinathar Temple: The temple is on the shores of Bay of Bengal. There is no tower or vimanas. The saint is facing the sea from a separate shrine in a Linga form on a square peeta-stage. The traditional Nagabarana (the divine snake jewel on the head of Linga) is also placed on the idol. The saint is considered as Lord Shiva and pujas performed accordingly. Pradosha pujas (puja on the 13th day of new moon or full moon days between 4.30 p.m. to 6.00 p.m.) Shivrathri puja in February –March and Aipasi Annabishekam in October-November are devotionally followed in the temple.

Sri Nandikeswara is opposite Lord Shiva shrine, Lord Vinayaka and Lord Muruga are in the front mandap. Sri Chandikeswara graces from the prakara. Saint Pattinathar belongs to Uthirada Star, hence pujas are offered to Him on the star days each month.

The entrance of the temple is not tall. The devotee has to enter bending the neck as a mark of humility. There are 27 lamps in His shrine representing 27 stars. Ghee is used to light the lamps. The sacred ash used for the abishek is offered as Prasad. It is also said that Kubera the Lord of Wealth was born as Pattinathar and hence the belief that praying here would bring in prosperity.

Near By Railway Station: Chennai Egmore