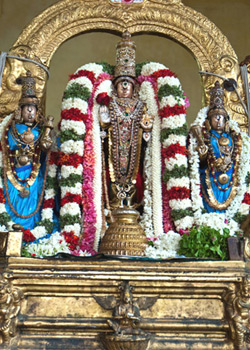 Lord Parthasarathy Swami Temple: Steeped in mythologies and eulogised by the Azhwars in their sacred hymns in Tamil glorified as Divya Prabandhams the Parthasarathy temple at Tiruvallikkeni or Triplicane, as the Britishers called it, happens to be the oldest temple in the city. The existence of the Tiruvallikeni village is seen in records dating back to the Pallava period and earlier. The village's name itself is derived from Lily pond in front of the temple, where it it said that Goddess Vedavalli, consort of Lord ranganatha, one of the five main deities, was born in a Lily flower. the pond itself was amidst a Tulasi forest(densed with Basil trees). Thus the temple forms the core of the area's history.

The UTHSAVAR LORD PARTHASARATHY with wounds is seen all over his face reportedly received from arrows hit by Bhishma during the Mahabharatha war. (when arrows hit by charioteer of Arjuna). He is accompanied by his consorts Rukmini and Sathyabhama. The idol of LORD PARTHASARATHY is charming and the lord is in his splendour at the time of Bramhotsavam.

The temple and the area TIRUVALLIKKENI derives the name from this tank, where it is said that GODDESS MAHALAKSHMI herself was born as VEDAVALLI to SAGE BHRIGU. It is said that lily flowers bloomed in this tank. This tank, it is said consist of five scared wells, and its waters are holier the Ganges. Float festival is held in this tank for seven days on the New Moon day in the month of masi .(Three days for Lord Parthasarathy and one each of Sri Narasimhar , Sri Ranganathar , Sri Ramar and Sri Gajendra Varathar.

Location : Triplicane-Tiruvallikeni is an important division in Chennai city. Town buses are available from every corner of the city to reach the temple comfortably. Electric train facility is also available.

Near By Railway Station : Triplicane