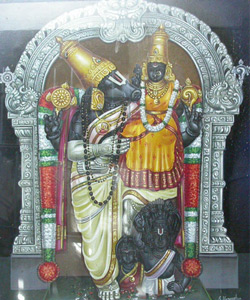 Sri Nitya Kalyana Perumal Temple: During Thretha Yuga, Bali the son of king Meganathan was ruling the kingdom in a righteous way. Demons Mali, Malyavan and Sumali and others sought the help of Bali to fight against the devas. Bali simply declined to help them. The demons fought alone were defeated by the Devas. They came again to Bali for help which he obliged this time. Bali won the war but was afflicted with Brahmmahati dosha. He came to this place for relief and performed penance on Lord Perumal. Pleased with his penance, Perumal appeared before Bali and granted darshan in Varaha Rupa.

Sage Kuni and his daughter performed penance on Lord Narayana to reach Sorga-Paradise. Kuni alone reached Sorga but not the daughter. Maharshi Narada told the young girl that she could not reach Sorga as she was not married. He requested other sages to marry her. One Kalava Maharshi married her and got 360 female children. He performed penance on Lord Narayana begging Him to marry his daughters. Narayana did not come. A brahmmachari - bachelor came one day there saying that he was on a Divyadesa Yatra. As he was very handsome as Nayarana, the sage requested him to marry his daughters. He agreed and married one each day. On the last day, He showed what He was. He was but Narayana in the form of Varaha. He fused all the daughters into one and had them on His left lap. As Perumal had them together in one form on His Left Lap (left in Tamil is Idam) the place came to be known as Tiruvidavendhai which later changed as Tiruvidandhai.

Of the celebrated 108 Divya Desas of Lord Vishnu, this is the only temple, where the Wedding Festival is celebrated throughout the year - all the 365 days of the year. Women facing delays in their wedding are advised to pray to Mother in the temple

Lord of the temple is praised in the Mangalasasanam hymns of Saints Tirumangai Azhwar and Manavala Mamunigal. There is a dot on the cheek of the Lord which is considered as a protection from the jealous look of others. Mother made a single woman fusing together 360 virgins, hence praised as Akhilavalli Nachiar. The philosophy behind this is described as that Lord Vishnu alone is Purusha the male and all others are but females. He is Nayaka. Others are Nayakis. Mother in Her separate shrine is worshipped as Komalavalli. Lord Perumal in the temple appears with one foot on earth, the other on the heads of Adisesha and his wife and having Akhilavalli Thayar on His left lap and graces as Lord Varaha Murthy.

Near By Railway Station : Chengalpattu