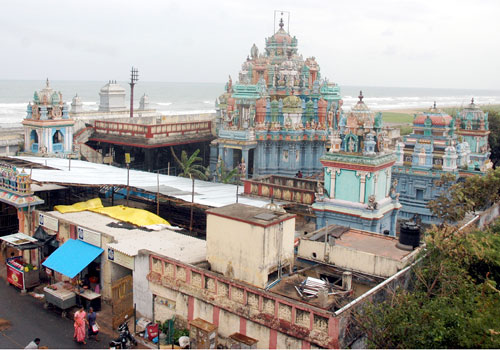 Lord Mahavishnu with Mother Mahalaksmi: The name Ashtalakshmi is obtained because it is dedicated to Eight Manifestation of Goddess Mahalakshmi. The festival season is between the month of September and October.

The Navararthri Festival is celebrated in a grand manner, Devotes from all over the city flock to this temple to attend this festival and also to take a cool breeze in the beach with family members. This is located at Elliots Beach which is approximately 10 kms.

The Ashtalakshmi (8 forms of Lakshmi) temple is on the sea shore in the city of Chennai. Lodging all the eight different aspects of Shakthi, this temple is one of recent origin. Apart from the shrines of the goddess, there are shrines for Sri Hanuman, Sri Guruvayurappa, Sri Ganesh, and Sri MahaVishnu. When one climbs on top of the temple, a beautiful panoramic sight of the city along the shore is visible. The temple was opened by Jagathguru Kamakoti Saraswathi Swami in 1976. The annual temple fair is celebrated in March April. The temple is also a good example for modern sculptures.

Location : The temple is situated at a distance of 10 km from central Chennai city.

Near By Railway Station : Chennai