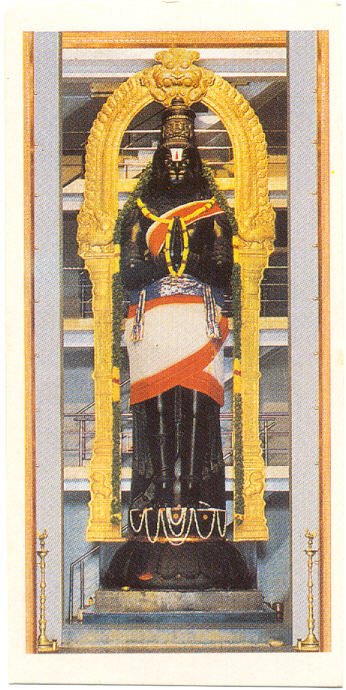 Anjaneya Swami Temple - Nanganallur : Nanganallur - the satellite town to the city of Chennai, formerly Madras, located about 10 Km from the city and 5 Km from the Airport, is now known as the town housing the 32 feet Viswaroopa Adhivyadhihara Sri Bhaktha Anjaneya Swamy. This temple is known for bestowing better health to the devotees. The idol is believed to have special power and is considered a healer. The Temple has indeed become a landmark and no tourist bus in that route skips the Temple. The Temple is accessible by road and by suburban trains stopping at Pazhavanthangal Railway station.

The main Temple building has path-ways all around the sanctum sanctorum and also a large covered space (Mandapam) for devotees to assemble in front of the Lord for offering worship.

On the North-West corner, a full-fledged Sannidhi for Sri Rama has been built and here He has taken abode with Seetha and Lakshmana with Anjaneya in attendance. The Gods are facing East. Rama's role as the protector and ruler is signified here as Rama is seen carrying his bow, hence the name "Kothanda Rama" for the Lord here.

Lord Rama : On the South-West, a Sannidhi for Lord Krishna with Rukmani and Satya Bhama, all facing East has been built and a "thulam" (weighing balance) has been erected for offering "thulabaram" (offering made in different materials equalent to the weight of the devotee).

Lord Krishna : Eventhough a Sannidhi for Lord Rama is normally built in Anjaneya temple, rarely a Sannidhi for Lord Krishna is built. Here in our Temple, Krishna Sannidhi is built to remind the devotees that among the Gods it was only Anjaneya who was present in both the indian epics. In Ramayana, as a direct disciple of Rama and in Mahabaratha, in the flag of Arjuna's Chariot as ordained by Lord Krishna to save it from destruction by the opponents.

In the North-East part of the Temple, on a small platform, "Vinayaka" is housed facing East and to his left on a yet another platform 'Naga' has been installed.

Lord Krishna : Moving towards the southern side of the outer Praharam facing West, Saint Raghavendra has taken His abode facing Lord Krishna.

On the Eastern side to the temple, a large building houses the Madapalli (kitchen) and the administrative wings, with facilities for offering Annadhanam. To the North-West of this building, a shed houses cows and calves to provide milk for daily Sevas to the Lord.